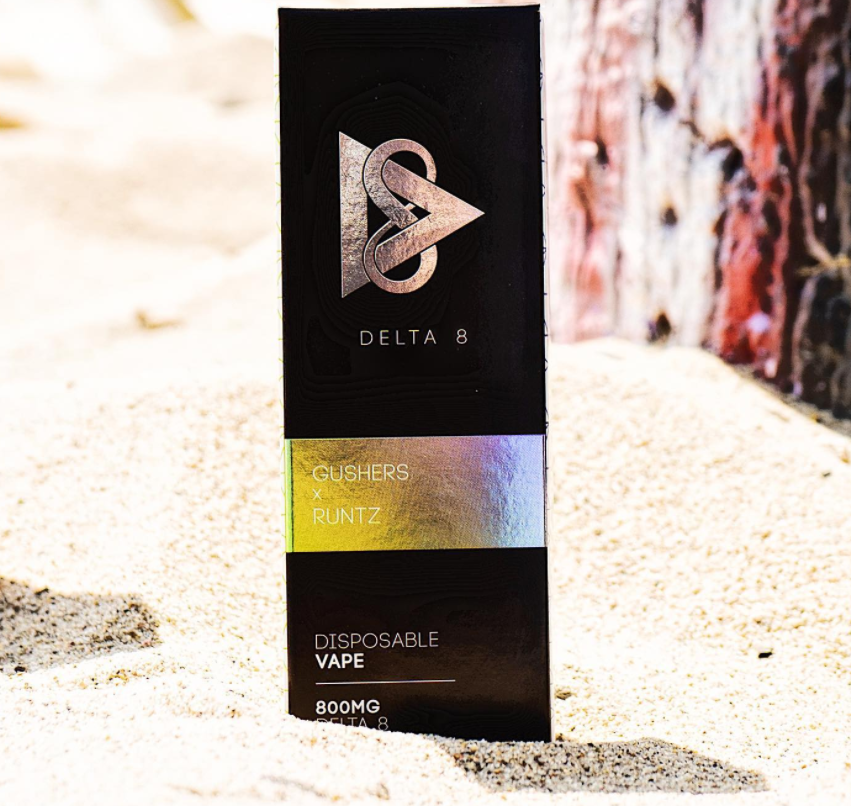 D8.co has become the newest hit of the delta 8 THC market thanks to their extremely innovative products, including their many vape cartridges or disposable vape pens, which combine two sought-after strains into one vape oil formula.  A favorite is Gushers x Runtz, bringing together two iconic hybrids to create an entirely new experience.  Besides the pairing offering complementary terpene flavor profiles, it also promotes a delta 8 high that’s out of this world, no matter which vape form it’s in, as you will soon find out here.

Gushers x Runtz is a combination made exclusively by D8.co, providing a balanced blend of two strains:

Both strains come together in this vape to deliver the best of both worlds.

You can imagine that with these two strains merge, your sweet tooth is gonna be satisfied.  But first, let’s focus on the aroma.  A plethora of berries and citrus collide as soon as you smell the strain, and you’ll also notice a bit of sourness combined with some underlying earthiness that is ever so slightly skunky.  The flavor, meanwhile, gives you a blast of fruity goodness with a nice measure of tang, reminiscent of the namesake of both strains that are in this blend.  That sweetness level really surprises you, since few strains are capable of delivering a genuinely sugary finish,  You can understand why then, too, the flavor alone makes this an absolute must-have as part of your hemp lifestyle.

The unique combo of strains is going to give you a totally distinctive series of cerebral effects that are generally extremely favorable.  At first, you may notice a quick-rising rush of euphoria, which gets the mind buzzing in all of the right ways.  Some of those creative juices may come out, or you may find yourself feeling talkative and sociable, which is why so many people love this strain combo when they’re planning on hanging out with their buddies.

The uplifting sensation feels like it keeps climbing higher and higher as time goes on.  Then comes a wave of gentle mellowness that doesn’t put you to sleep but does make you feel more like retreating into your inner world as you find yourself feeling at ease with the world around you.  So, while it starts out giving you a major boost, it ends with a calm.

As this strain’s euphoric blend starts to build, so does your physical motivation, which can come in handy during the daytime when you need to feel less stressed but not glued to the couch.  You might be surprised by just how many tasks you’re suddenly inspired to complete, whether they be household chores or an artistic product that you’ve been slacking on.  After a while, past the peak, you’ll feel the muscles melting, but not to the extent that you want to go lie down.  It’s generally a great afternoon strain, or even one for the morning hours, since it doesn’t seem to cause an excessively heavy feeling that makes you want to take a nap.  However, it will slow you down to some extent toward the end of the high, so plan for that should you have anything important planned.

This is a strain that’s both very fast-acting and highly potent, but still, allow us to explain why that shouldn’t scare you even if you’re a newbie.  Despite the seemingly ever-climbing euphoria ladder that you’ll be on from right away, you likely won’t get any strong feelings of paranoia that can come with many other strains that are often recommended.  It’s likely that as long as you only stick to a reasonable amount of puffs off of your vape, you’ll feel more and more uplifted as time goes on.  Again, the potency isn’t going to cause you to feel knocked out – at least it shouldn’t – so you won’t have to worry about getting so high that you lose your ability to function for the rest of the day.

This strain combo really does do all that it promises.  Within just moments of vaping it, there was a fast rise to a feeling of complete and utter joy, complete with a tingling sensation in the head muscles that really complemented the experience and felt like it was activating our sense of creativity.  There was a surprising lack of grogginess, although there was definitely a strong psychoactive effect at work.  Overall, this feeling lasted for a good 90 or so minutes before slowly fading away.

D8.co Gushers x Runtz Vape Carts and Disposable Vape Pens are one of a kind.  They give you everything you could want out of any delta 8 THC vaping experience, complete with a stellar buzz, an elevated mood, and a body high that makes the muscles melt.  Whether you’re craving it in disposable or cartridge form, D8.co has got you covered with phenomenal purity, zero additives, and fast-acting, extremely bioavailable effects for maximum hemp-based enjoyment.

What is Gushers x Runtz strain?

Our Gushers x Runtz is a homemade hybrid crossing two iconic cultivars together. Both Gushers and Runtz are known for their smooth, uplifting qualities and their soothing effects on the muscles. These strains also boast a sugary and fruity taste that when paired together is out of this world.