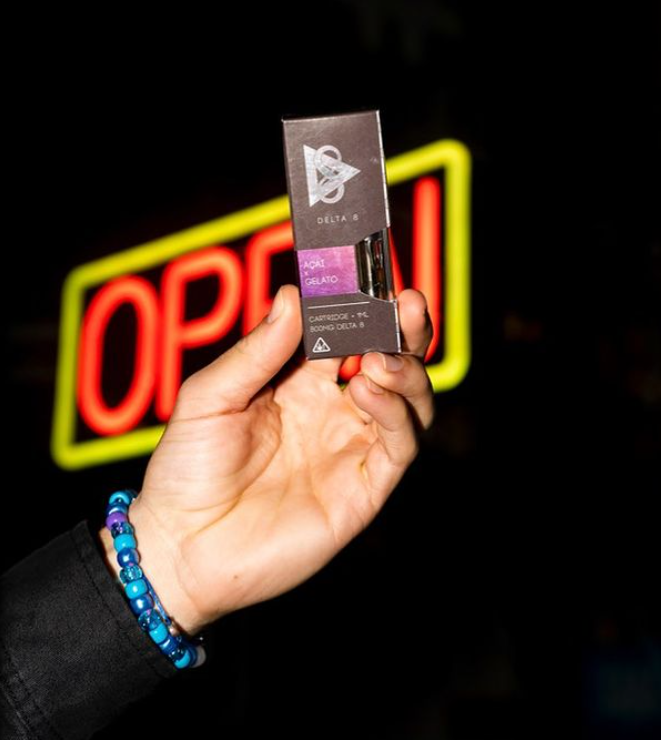 There really is nothing quite like vaping premium delta 8 THC in order to get you into the right space and simply unwind after a long day.  In fact, some of the best delta 8 vaping goods are coming from D8.co, who really goes above and beyond to provide the finest and cleanest oils possible.  They’ve worked hard to secure the most sought-after strains possible, and one that is on everyone’s list is Acai Berry Gelato, which can be found in their Acai x Gelato product line (Vape Cartridge and Disposable Vape Pen).

Acai x Gelato comes from “Acai Berry Gelato”, a sativa-dominant hybrid strain with a 70/30 profile.  It’s derived from a blend between:

Worth pointing out that both strains are enormously popular and highly sought-after.  So, you can only imagine then, the treat that users are in for by choosing this magnificent blend of terpenes.  It naturally yields just an above-average THC level that’s somewhere between 15%-19%.  Overall, it has everything you could ask for if you desire a nice balance that’s just a bit stronger on the more sativa side of things.

Acai Berry Gelato’s aroma satisfies you right away with notes of juicy berries, bright citrus and a tangy earthiness that adds depth and complexity to the scent.  The tropical nature of the fruitiness gets the mouth instantly watering even before you get a chance to taste the strain.  That fruitiness definitely dominates the flavor profile, with notes of juicy acai berries carrying you through to give you a taste of paradise.  Other tropical fruits make their way into the flavor profile, while a sweetness of forest-fresh berries and a tangy kick of lemon come out to play.  There is also a seductive creaminess which comes from the Sunset Sherbet’s influence, and enough sweetness to leave you fully satisfied.

Acai Berry Gelato is one of those strains that can suit your needs whether you’re enjoying some hemp in the morning, afternoon or night.  Its easygoing nature makes it a big crowd pleaser, since it’s never too heavy.  It’s great for beginners in that regard, since rather than giving you heavy cerebral effects, it just makes you feel carefree, uplifted and less stressed out than you were before.  Many people say it’s a creative strain, meaning that it can make you feel more inspired while you’re engaging in some type of artistic endeavor like playing music or drawing.  Others claim it to be a good social strain, and we have to agree since you’ll feel less foggy and likely to lose your train of thought in the middle of a buzzing conversation.

Overall, this laid back strain is a good choice to have on hand for when you want more of a gentle, soothing, and tingly buzz rather than a powerful high that disrupts your mental flow.

Similarly, Acai Berry Gelato gives a nice general boost to add a spring to your step, without making you feel unpleasantly speedy or on edge in any way.  It’s definitely not a couchlock strain, nor is it the best choice for bedtime when you’re likely craving a heavier body high effect that impacts your muscles.  You will still feel more at ease, meaning that if you’re holding in some tension within the muscles, you can likely notice a nice release which makes you feel generally good all over.  But, the bottom line is that this is not a strain that’s particularly associated with notable body effects.

This strain is generally mild to moderate in terms of the strength of its effects, meaning that you won’t feel “too high” unless you really go for it in a way that most people wouldn’t feel the need to.  That being said, it’s a good all-around strain for beginners and experienced users, since there’s really nothing to complain about.  Not the fastest-acting strain, nor is it the longest-lasting – sits right in the middle instead.  Good strain to try for the first time if you’re not sure what you want in terms of indica and sativa profiles, since like we said, it has easygoing effects that never swing too far in any particular direction.

Acai Berry Gelato is sort of a groovy strain to vape, as we can attest to.  Enjoying it mid-afternoon was the smart way to go since it’s likely that vaping it in the evening would stop us from getting as much as we wanted out of it.  The creative juices began flowing in just minutes, but we never stopped feeling like we could continue a conversation.  It doesn’t really feel too heavy at any point, which is exactly what we were looking for.  There will likely be a grin that lasts you for the duration of the high since it really puts the mind at ease in a profound way.

D8.co Acai x Gelato Vape Cartridge and Disposable Vape Pen simply guarantee the finest delta 8 THC vaping experience imaginable.  It’s a strain that never fails to satisfy with every hit, all thanks to exceptionally balance of effects and a nice boost that can get you through the day ahead.  Made with clean ingredients, this vape-based product is fast-acting, potent, and very bioavailable.  You can finally achieve pure satisfaction at last!

What is Acai x Gelato Strain?

Acai x Gelato refers to the strain Acai Berry Gelato. This 70% sativa-leaning hybrid comes from a cross between Pink Panties and Sunset Sherbet. It offers a mood-boosting high that’s great for focus and creativity. It’s a strain that can really come in handy during the daytime.