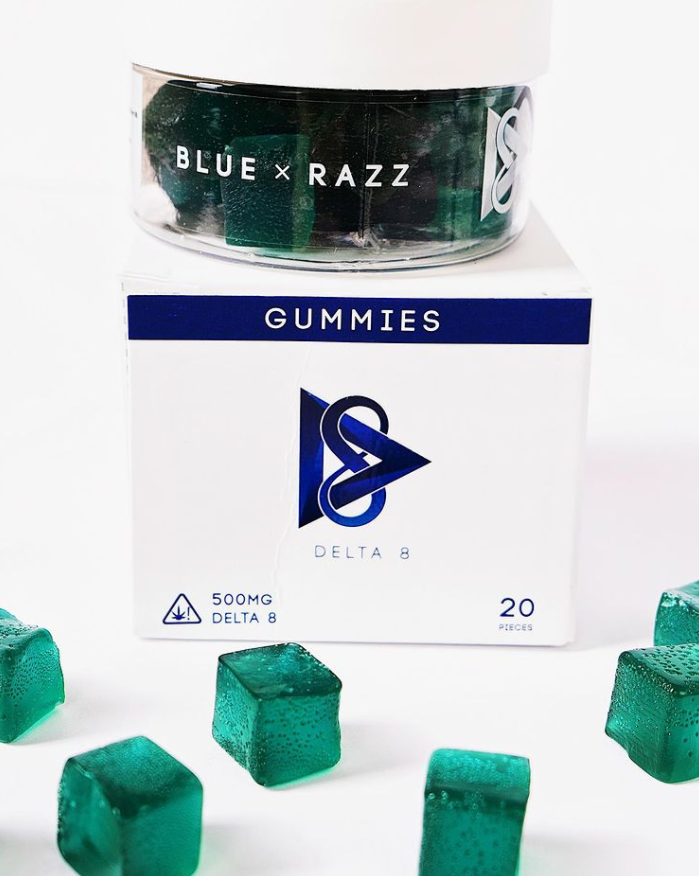 Why settle for any ol’ delta 8 gummies, when you can choose ones that come in the perfect strain for your daily needs?  D8.co Blue x Razz Delta 8 Gummies offer not only mouthwatering sweet and tart berry flavor, but one of the most sought-after strains of the year for a deeply balanced and euphoria-inducing delta-8 experience.  Infused with the cleanest and freshest terpenes around, along with delta 8 THC distillate, these edibles are capable of giving you up to 8 hours of pure hemp-induced enjoyment.

Blue Razz is believed to be derived from “Raspberry Kush” and an unknown parent strain, acting as a powerful hybrid that offers a very good balance between indica and sativa, with most saying that it does lean slightly more toward indica.  Its mysterious lineage means that we don’t know much about which strains have been brought together, but we do know that it’s an American-bred hybrid.  We also know little about its exact THC level, and growers will be disappointed to know that its seeds are virtually inaccessible due to its overall rarity.  While it almost exists exclusively in vape form, D8.co has made it possible to savor it as a gummy.

D8.co infused their Blue x Razz Gummies with lots of mouthwatering flavor, all from natural ingredients, to deliver the sweet and sour taste that so many of us think of immediately when we hear those two words together.  But, while the gummies are definitely outstanding in their taste, we’d like to concentrate more on the flavor and aroma of the strain itself, which is quite fascinating and speaks of the terpene profile.

Blue Razz smells strongly of fresh berries, and you’ll get the tartness from the scent alone.  There is a skunkiness underneath everything, while a nice amount of sweetness adds to the fragrance.  The flavor is much more straightforward in its sugary and tangy taste of dark, juicy berries, ensuring a deeply satisfying taste.

Blue Razz is considered a nighttime strain for a reason.  For one thing, its cerebral effects can be really strong, and can lead to feelings of drowsiness mentally speaking, which make you feel unable to do anything but turn off your mind and let the sleepiness wash over you.  Don’t expect to get any projects done after taking this gummy, because you can very well find yourself losing your train of thought over and over again.  And, that’s not a bad thing if you want to just tune out and unwind for a few hours.  The feeling of happiness takes over first, making you feel a sense of euphoria that’s always welcomed, especially after a long day.  Overall, you’ll likely notice next to no stress for the duration of the high, as you gain a fresh perspective on the things that were bothering you earlier on in the day.

Yep – this strain is a serious couchlock contender.  That’s the other reason why it’s recommended at nighttime.  This is not a strain to enjoy socially, as you’ll likely find yourself parked on a couch in a state of near slumber should you eat a gummy at a party.  This combined with the mental effects again makes it a clear winner for bedtime use, since it can totally knock out your energy levels and provide a warm, soothing sensation that washes over every muscle.  And, speaking of muscles, this is a great strain if you’re dealing with tension throughout the body, since many people find that they feel totally at ease from head to toe.

We are going to go ahead and say that this is definitely one of the most potent strains offered at D8.co.  This refers to both the cerebral and the physical effects, so you’ll want to really consider that before taking it, especially if you have something going on later on in the day.  Basically, because these are gummies, the effects will last for several hours.  If you’re used to vaping delta 8, you may underestimate just how long the effects of this strain can last.

Of course, the flavor was delicious given the natural fruit extracts used in the formula, but we know that most of you want to hear about the strain itself.  Blue Razz is exactly what we expected it to be – a heavy strain for both body and mind.  There was definitely a bit of euphoria in there, but once it does hit you, it hits you hard.  We went from feeling chatty as usual to suddenly feeling sedated from head to toe, and in a way that was really enjoyable, we might add.  The mental effects come first, clearing your mind of worry, but also the ability to really hang onto any thought for a long time.  Then came the couchlock, and from that point, it was several hours of intense ease and inner peace.

Give This Awesome Strain a Try!

D8.co Blue x Razz Delta 8 Gummies provide everything you could ask for from a delta 8 edible – magnificent flavor, clean ingredients, powerful servings of delta 8 THC, and the properties of a phenomenal hybrid strain that can satisfy just about everyone’s needs.  We can’t recommend these gummies enough if you’re looking for a more long-lasting way to enjoy the most glorious properties found within the hemp plant.

What is Blue x Razz strain?

Blue Razz, aka “Blue Raspberry,” is a potent hybrid strain that boasts Raspberry Kush as its only known parent. The strain is renowned for its uplifting properties that can put a smile on your face. Despite its potency, it’s quite easy-going, and great for any time of day. Its mouthwatering sweet and tart berry flavor makes it all the more of a crowd pleaser.